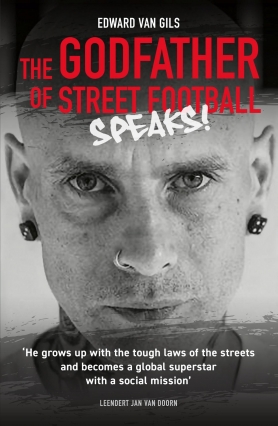 THE BIZARRE LIFE STORY OF A GLOBAL LEGEND

The moving and shocking life story of Edward van Gils. A boy who gets off to a bad start and has to learn to survive in the harsh world of the streets. He becomes the best street football player in the world and is given the honorary title 'The Godfather of Street Football'. These days, he dedicates his life to children from a rough background over the whole world. From Rio de Janeiro, New York, Amsterdam to Mumbai, he visits schools, orphanages and youth prisons to share his life lessons and help young people.

'I got to know Edward at football events. We are still
in touch today. His football skills are unrivalled,
but Edward is mainly a wonderful human with a very warm heart.
Just a great guy.'

'The streets are in my DNA. Like no other, I know what it's like
to come from a rough background and go off the rails. I count myself lucky
that I got a push in the right direction
at the important moments in my life. I'm now trying to give young people
who need it that same push.'

'Edward is a great personality and a wonderfully humble person who
is giving young people something amazing, and I'm proud to be
part of that.'